"Rosie the Riveter" by Norman Rockwell 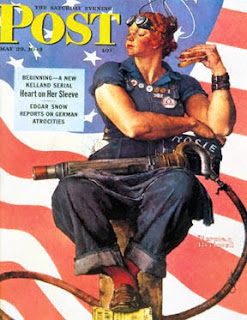 The propaganda, Rosie the Riveter (1943), was originally featured on the front cover of an edition of the popular magazine, the Saturday Evening Post. After Japan’s bombing of Pearl Harbor, U.S. intervention in World War II, and the consequent increase of men in the military, the U.S. government launched propaganda campaigns. These campaigns targeted women to enter the work force. This was due to the need to meet the production demand in factories. Norman Rockwell, a Saturday Evening Post artist, developed the original Rosie the Riveter painting in 1943. Rockwell was born in New York in 1894. He was a devoted artist, attending The New York School of Art when he was fourteen and afterward both The National Academy of Design and The Art Students League. His first job as an artist was before the age of sixteen, and he later designed hundreds of front covers for the Saturday Evening Post (Norman Rockwell Museum). One of these covers, Rosie the Riveter, was likely influenced by the 1943 song, “Rosie the Riveter”, by John Jacob Loeb and Redd Evan. This song persuaded women to work in factories, which is similar to the message of Rockwell’s cover (Doyle). The artist's work was used to advocate women’s civil rights and laid a foundation for later feminist artworks, in which Rosie would be a symbol of female empowerment.
This work contains significant details that display women’s lack of femininity during World War II. Women were generally depicted as frail and were painted wearing dresses or doing work in the household. Rockwell’s Rosie the Riveter does not follow this norm. Rockwell ignores women’s femininity through Rosie's appearance and environment. Rosie’s arms and body are wide and muscular. She is wearing working overalls, clothing that would not normally be seen on a woman of her time, and her shoes look as if they could be worn by a male. A riveting gun rests in her lap. Furthermore, Rockwell was well known for the humor in his work, which he did not fail to add in Rosie the Riveter. Adolph Hitler’s book, Mein Kampf, lies under the foot of the woman. Through this detail, Rockwell is implying that even females are superior to Hitler’s ideology. Rosie’s face and hair are other details that support the lack of femininity in the piece. Instead of a very narrow face with long hair, her cheeks are broad and her hair is short and masculine. Lastly, her pose is not typical of a woman of her time: Rosie’s posture is very rigid, she is strong and demanding, and her head is held up high.

When investigating femininity expressed during times of war, one can see that Rosie the Riveter is strictly propaganda, which displays the acceptance of masculine women. In the artwork, Rosie gives up her traditional values and duties—cleaning, cooking, and caring for children. She takes on a man’s role and aids the war by working in a factory. Rockwell’s propaganda is trying to prove that when necessary, as in a time of war, a woman is capable of turning away from her femininity. The woman in the cover is displaying female power, strength, and capability. Thus, Rosie the Riveter expresses a similar message to another feminist propaganda—Valenzuela’s Miliciana de Waswalito. Rockwell’s propaganda stresses women’s ability to work as a man and their duty to sacrifice their femininity to support war.
“About Norman Rockwell” Norman Rockwell Museum. 08 May 2011
<http://www.nrm.org/about-2/about-norman-rockwell>.
Doyle, Jack. “Rosie The Riveter”Pop History Dig.30 April 2011
<http://www.pophistorydig.com/?p=877>.
“The Riveter: Women Working During World War II” nps.gov 30 April 2011
<http://www.nps.gov/pwro/collection/website/rosie.htm>.
Posted by Ariana H.