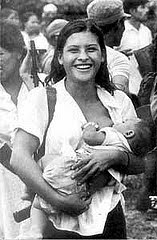 Orlando Valenzuela’s Miliciana de Waswalito (1984) is a photograph of a woman in Matagalpa, Nicaragua. It was taken during the Sandinista Revolution, which was also known as the Contra War. This revolution was a result of the dictator, Anastasio “Tacho” Somoza Garcia. The dictator caused dissension by allowing only himself and his close friends control over alien businesses, not keeping promises made during his campaign, driving the country into debt, and finally by detaining 500 students who were part of a non-violent protest against his re-election (Truman). To end Somoza’s dictatorship, which was supported by the U.S., many Nicaraguans joined the Sandinista National Liberation Front (FSLN) under Carlos Fonseca Amador (Turman). The photograph was taken by Valenzuela, the editor and photographer of the Youth Boys magazine. Later, it was so famous it became the image of the World Solidarity Campaign Nicaragua. This photograph captures a moment in which a woman represents her position as both a soldier and as a mother of the Sandinista Revolution.
This photo is of a woman carrying out two tasks at once: she is nursing a young baby and carrying a gun over her right shoulder. Behind her, the commotion and turmoil of the Contra War continues on; however, she calmly proceeds with her job, which is to act as a mother and a fighter. The placement of the child and the gun show there is an equal balance; one duty does not outweigh the other. The woman in the center of the photograph is significant because Valenzuela hoped for her to be the only focus of the photograph, allowing the viewer to observe the gun and the child. Another factor that shows this focus are the colors of the photograph: black and white. This style draws people away from small details, and instead to the bigger, more important objects of feminism.
This photograph is clearly Nicaraguan propaganda that demonstrates society’s acceptance of a female's ability to take on two very different roles. The woman in the painting is a symbol of the coexistence of these diverse jobs. Although she is shown fighting in war, the mother remains loyal to her conventional duty—caring for her baby. The photographer displays that females are capable of male's jobs, even the most extreme tasks such as fighting in war. Moreover, their obligation to the tradition of raising and nurturing children is still revealed. Valenzuela makes people aware of the fact that women are still feminine when doing masculine feats. The photograph shows that in times of war a woman does not need to be completely masculine as Rosie the Riveter implies, and she does not need to lose her femininity to the gun.