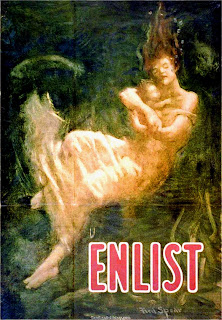 Maurice Rickards, the author of Posters of the First World War, states that Enlist (1915), by Fred Spear, is "perhaps the most powerful of all war posters" (Selected Graphic Images). The artwork is based off of one of America’s most heartbreaking moments—the sinking of the Lusitania in 1915. Despite several warnings from newspapers and telegrams of the dangers of the “European War Zone”, Captain W.T. Turner sailed the Lusitania from New York City to Liverpool, England with goods to aid the British in World War I. The U.S. was currently neutral in the war; nevertheless, they were to be victims of attack from the Germans. Off the coast of Ireland, a German submarine fired a torpedo at the British ocean liner. At 2:10 on May 7, 1915 over 1,000 innocent people were killed by the attack, including hundreds of American passengers (EyeWitness to History). Although the U.S. did not officially join World War I until two years after the incident, the sinking was one factor that led to their involvement. The event was an unforgettable catastrophe and resulted in propaganda from both sides of the disaster: the Germans declaring the presence of weapons on the ocean liner in the form of a medallion and the U.S. using the sinking to persuade men to join the war efforts (Kerr).
The woman in Spear’s Enlist is very feminine, even though it was created during war. In the center of the work, a woman and child sink after the destruction of the Lusitania. The mother cradles her young baby, as if to protect it, as she sinks deeper and deeper into the water. Her hair is long and elegant, almost blending into the artist’s water strokes. A white dress is draped over; this dress represents the purity, innocence, and femininity of the woman and the child. From the woman’s face, one can tell that she does not struggle to live but submits to the violence of war inflicted upon her and accepts her death with a peaceful expression. Aside from this focus of femininity in the painting, the poster is a dark, mossy green, giving the artwork a depressing tone. Due to the dying woman and child, the word 'enlist' makes men feel responsible for the protection of the "weak" from the dangers of war.
Enlist displays the female gender as strictly feminine. Although this piece was during a time in which women could potentially join the war efforts, Spear does not portray this message in his propaganda. The woman is vulnerable and lacks any sign of strength. Through this, Spear makes clear that women are not meant to fight in war. Compared to the masculine women in Norman Rockwell’s Rosie the Riveter and Orlando Valenzuela’s Miliciana de Waswalito, this painting’s message is very different. This poster portrays women as having a completely different purpose in life. Females are not mean to join war, but are defenseless victims to the enemy in war. In this specific painting, Spear makes a woman the target of abuse and harm, and the artist uses a woman to appeal to men to enlist in the military.
"Captain Turner" Lusitania Online. 10 May 2011
<http://www.lusitania.net/>.
“Enlist by Fred Spear” English.emory 10 May 2011
<http://www.english.emory.edu/LostPoets/Enlist.html>.
Kerr, Stephen T. “Selected Graphic Images” Washington. 30 April 2011
<http://faculty.washington.edu/stkerr/graphics.html>.