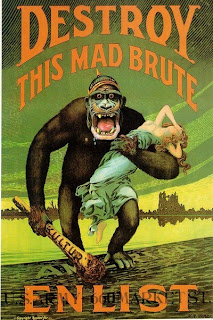 Destroy This Mad Brute—Enlist (1917) by H.R. Hopps was an American Recruitment poster, which attacked Germany for their brutal actions in the Rape of Belgium. In 1904, two European countries, France and Britain, signed the Entente Cordiale. This agreement stated that the countries were to be allies against their common enemy, Germany. Thus, the German military felt threatened and vulnerable to not only these two nations, but also to Russia, who was discussing joining the Entente Cordiale. The Germans decided to take action. On December 1905, Alfred von Schlieffen, The Army Chief of Staff, established Germany’s military strategy—the Schlieffen Plan. The purpose of this plan was to protect Germany by forcing France to surrender. If carried out efficiently, the plan would eliminate the threat of attack from France, Russia, and Britain. Schlieffen's plan entailed marching through Belgium, Holland, and Luxembourg to invade France (Spartacus Educational). Furthermore, the German chancellor, Theobald von Bethmann Hollweg, disregarded the Treaty of London. This treaty called for Germany and other European nations to respect France's neutrality. Therefore, the German government allowed their military to execute the Schlieffen plan on August 2, 1914. The march through Belgium, which became know as the Rape of Belgium, was a major event in World War I. The rape took place in central and eastern Belgium and was a result of German soldiers' fear of Belgium guerrilla fighters (Antwerp Tourist Guide). Innocent women and children were victims to the catastrophe. The Rape of Belgium added to the tension and drama of World War I, an event that would lead to new propaganda.
In this painting, two objects criticize German society. First, the word 'Kultur' on the bloody club suggests that Germans are uncivilized. Secondly, the gorilla is wearing a distinctive German Military spiked helmet with 'militarism' on the front to degrade German government methods (Haverford). Holding these objects is a gorilla, who represents a German soldier. The German is depicted as a gorilla because Americans believed soldiers' actions throughout the Rape of Belgium were astonishing and horrific, making the soldiers barbaric. In the arms of the 'mad brute' is a maiden. She is displayed as feminine through her apparel and hair, submission to the abuse of others, and the fact that she is helpless. Lastly, France is demolished in the background; this portrays the destruction of German troops and their potential threat to America (Haverford).
In Destroy This Mad Brute—Enlist one can see that the actions of the Germans against women is related to woman’s association with the land. Nations are typically known as “she”. By taking over women, the soldiers were taking over the land of America. In addition, they conquered the people genetically, by making the women have children who were part foreign. Consequently, American men who see the propaganda will want to protect their people against other nations in the war, specifically from putting women’s virginity at risk, violating their purity, and taking over their land. Norman Rockwell's Rosie the Riveter and Orlando Valenzuela's Miliciana de Waswalito are opposite of Hopps views; however, this poster relates to Fred Spear’s Enlist because the two pieces display women as helpless, weak victims of war.
“Destroy This Mad Brute” Digital Desk. 10 May 2011                          <http://www.digitaldesk.org/projects/secondary/propaganda/destroy_brute.html>.
“Schlieffen Plan” Spartacus Educational 10 April 2011
<http://www.spartacus.schoolnet.co.uk/FWWschlieffenP.htm>.
“Belgium in World War I” Antwerp Tourist Guide. 10 April 2011
<http://www.antwerp-tourist-guide.com/world-war-one.html>.
“Recruitment and War Bond Posters” Haverford.edu 10 May 2011
<http://www.haverford.edu/engl/english354/GreatWar/Mainpages/recruit.html>.
Posted by Ariana H.