"Keep These Hands Off" by Gordon K. Odell 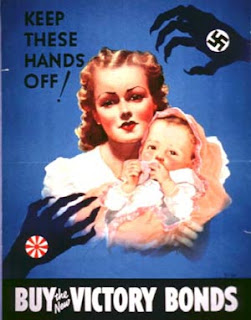 Gordon K. Odell designed the Canadian propaganda piece, Keep These Hands Off (1941-42), to encourage the public to buy victory bonds. These bonds would help finance the military throughout World War II. The war costs the Allies, including the U.S., Russia, France, England, and Canada, enormous sums of money from the years 1939 to 1945. Thus, the governments needed the support of the common people to successfully progress in the war. Canada’s government sold victory bonds for money and to make buyers feel as if they were contributing to the war, resulting in a morale boost.
In Keep These Hands Off, there are symbols on two hands, which represent Nazi Germany and the Empire of Japan. The hands loom over a mother and her young child (Picture History). Above the two, Odell wrote 'Keep these hands off!' as a form of persuading men to join the military. The mother and child are in the center of the propaganda. They are painted with pale, delicate colors while dark, witch-like hands jeopardize their security. These details are important because they affect the viewer on an emotional level, by making them feel responsible for the wellbeing of women and children. The mother and child are symbols of the helplessness of the female gender and suggest the need to protect them through aiding the war’s finances.
Although it was created during World War II, this image uses several methods to emphasize women’s femininity. Due to the Industrial Revolution prior to World War II, men turned to mechanized labor, whereas women became associated with domestic work: caring for children, cleaning, and cooking (Women in Literature). One factor that resembles femininity—caring for children—is evident in Odell’s painting. Aside from the appearance of the baby, the fact that the woman is in need of a man influences viewers to believe that women should remain as they are and not participate in nondomestic work. The mother is placid, defenseless, and vulnerable as two hands attempt to grasp her and the young child. No masculine characteristics such as the muscular arms in Rosie the Riveter or the gun in Miliciana de Waswalito are included in this propaganda. This shows that Odell, similarly to many others of the time, did not believe war was a time for women to give up their traditional duties and turn to those of men. Instead, he stresses the femininity of the female gender through their perpetual lifestyle of domestic work and dependence on men.
“Poster Art from World War II” The National Archives. 30 April 2011
<http://www.archives.gov/exhibits/powers_of_persuasion/warning/warning.html>.
“Women in the Twentieth Centruy and Beyond” Women in Literature. 30 April 2011
<http://www2.ivcc.edu/gen2002/twentieth_century.htm>.
“The Allies” World War II Info. 08 May 2011
<http://www.worldwar2history.info/war/Allies.htm>.
Posted by Ariana H.